We asked our families, who have brought a child home recently, for a little bit about their adoption journey. We were blessed with many responses. Our latest coming from the Ainsworth family whom we helped bring home their three beautiful daughters! 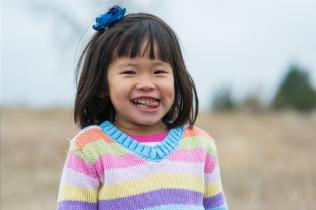 It has been 10 months now and our little girl has transitioned so well in to our family.  It was different adopting a 3 year old after adopting our 2 other daughters which we adopted at younger age.  The difference for our family was we got an older confident little girl who knows what she wants.  For example, Kennedy has made it clear she does not like the American name of Kennedy Anne which we chose for her and she has stated she would like everyone to call her by her Chinese name which is Linlian; so we gracefully comply even after 10 months.


Even after our family continued to speak Chinese & English in our home to her, after a few months Linlian spoke fluent English and no Chinese.  Then after a few more months she did not remember any of the Chinese language or frankly anything about her life in China. What she has left of her memories of China is feelings about experiences, sounds and objects for example, seeing a train she says “Mommy and I rode a train together” which we did from Guangzhou to Hong Kong.  It has been amazing for us to watch the transition and see her personality blossom in to this extraordinary little girl. We feel she has been with us her entire life and Linlian feels the same. 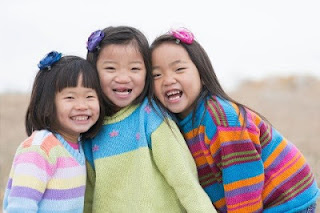 Once again Thank you AAC.
Many blessings


Tom, Juleanne, Emerson, Sterling & Linlian (aka Kennedy but as I read this to her and said the name “Kennedy” she firmly said “NO it is Linlian”)
For more about this beautiful girl and her journey through adoption please check out Juleanne's website www.ourtriplehappiness.net
Posted by AAC Adoption and Family Network at 9:53 AM 2 comments:

So as promised we are going to start highlighting some of our families experiences. 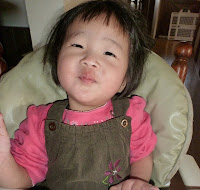 First up is the King family. They just got back from adopting their newest member, Kyrain, mid January. Here is a portion of their story...


I am sorry it has taken me so long to post. Yesterday was grueling. We received Kyrain at 9:30 in the morning, did some paperwork, had a couple of hours in our room enjoying her and then spent the entire afternoon completing the adoption process. By the time we got back to our room, got something to eat we all dropped into bed exhausted...

Kyrain is doing really well. She is an absolute joy and BUSY does not adequately describe her. I am not sure if we are seeing a lot of nervous energy right now or if she really does go like this all day long. If she does - Lord help us!

She is of course quite smitten with Daddy and calls him that all ready. She imitates every word we say and was trying to say all of the kids names. She talks and babbles, laughs and smiles continuously. We have not worn out the game of peek a boo and she thinks it is a great riot each and every time.

After we got back from the adoption process we were in the lobby of the hotel waiting for Paul to exchange some money at the desk. Kyrain was wandering around by me when she spotted her daddy across the lobby. She suddenly let out a squeal of "daddy" and ran to him. Three times while she wandered around by him she was approached by one of the bell hops who held his arms out to her to pick her up and each time she ran to Paul calling Daddy and reached her arms up to him to be picked up. It moved me to tears. It is incredible that after 1 day he is already her safe place. She was apparently very fond of her foster father so we have avoided calling Paul "Babba." Each time I called him that earlier in the day she would get a hopeful little look on her face and look around.

She really is doing so well. She cried for a little bit when she was first given to us and then again at bed time. She laid between us and did stop crying but her eyes had a frightened, confused look in them. We soothed her for a few minutes and she did fall fast asleep.

For more about the Kings family adoption you can check out their blog KingsKids.
Posted by AAC Adoption and Family Network at 12:38 PM No comments:

This year is off to a great start.... 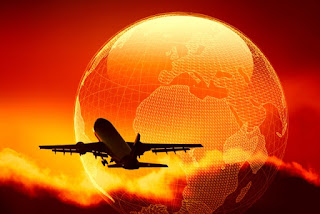 The new year has been upon us for a month and things are off and running and fast!

In the months of November and December we had 9 families leave for China bringing home 10 children!

The month of January revealed that 11 families would be heading out of country to pick up their children in China. 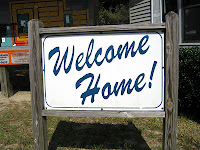 Over the next couple weeks we will be spotlighting families that have finished the adoption process and their journey. Stay tuned.


Until then we would like to say "Welcome Home families! Welcome Home!"

Posted by AAC Adoption and Family Network at 11:54 AM No comments:

Is it time to file your taxes?

It was announced earlier this year that the Tax Credit was saved!! WAHOO!

So when you are getting ready to do your taxes here is the form that you will need.

Posted by AAC Adoption and Family Network at 11:20 AM 1 comment: