I can laugh now- looking at my kids playing in the water sprinkler, jumping on the playground, flying kites, digging in the sand, and getting ice cream all over their faces- about how very little having a child with a special need has affected our lives in the way we thought it would. It feels more like… just having another child.

Like everyone in the early stages of planning a China adoption, I thought that we would be adopting a young healthy baby girl. No reason except that it was what I had seen in the media my whole life. When we started calling around to agencies, that’s the first time I had heard the term “special needs program”, which, quite frankly, scared the heck out of us. And not only were boys available for adoption, it was also considered a special need because less people were even open to a boy than a girl.

So we did the obligatory “check list”, which nearly every parent will tell you is the worst part of the whole process. For us, it was a good time to do some research. I printed up a long list of special needs common to adoption, many of which I’d never heard of, and some which I had predisposed ideas about. Every day I would google search two or three of those needs, and at least learn about what they were- even the ones I thought I already understood. I didn’t discriminate on the list of needs, because I knew that there are new treatments available all the time. I learned loads about clefts, limb differences, HIV, deafness, albinism, and hemophilia, just to name a few. And I found out most of those aren’t really so scary at all. It took me about a month to skim over the wiki version of the major special needs. 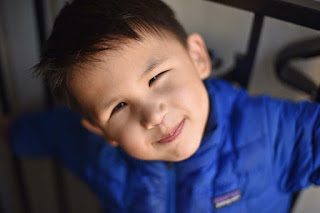 I saw the face of our son on a waiting child site, but of course I didn’t know he would be ours. I just thought he was the cutest thing ever. He was four, which was older than I wanted. He was a boy, which surprised me. And he had a scary special need: he was blind.

My first thought: NOPE. We couldn’t parent a blind kid. We didn’t know a thing about blindness. I’m messy. We live in a busy downtown with no blind school. I assumed a blind child would have to live with me forever. But my curiosity got the best of me, and I found myself asking parents of blind children, and chatting with blind adults online about how it affected their daily lives.

I learned that all blind children can receive public education AND blind instruction in whatever school they attend. That they learn cane and mobility skills for free as well. They have refreshable tablets that let them scroll facebook and read the internet. They can use iPads and iPhones because there are built in applications that make them accessible. They are college grads and professionals that are only limited to not driving their own cars (which is changing with the invention of the Google car!).

We did pursue his adoption. The chances that a boy over the age of 1 that has a vision impairment will be adopted is among the lowest of all special needs. I admit, I had a panic attack every week leading up to China, thinking that we were taking on something too big. I still was a little nervous when we met him. But he is not scared of blindness. He has changed my (unintended) preconceived ideas of blind people. He joyfully greets everyone who walks into a room. He loves the doctors appointments and we are currently putting his education plan in place. And, much to my dismay, I have not become any tidier at my housekeeping skills, because my son very skillfully can step right over my horrible mess and piles of laundry, and his sibling’s toys everywhere. He has so easily blended into our family. 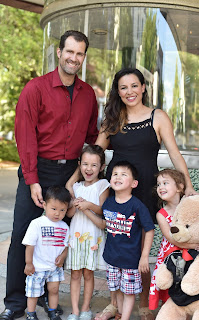 We learned when we came home that we cannot fix his eyes as we had hoped. I would be lying if I said I wasn’t a little bit sad that he won’t ever see my face or his first child. But my son’s biggest special need was for someone to SEE him. He has been the greatest joy for those that have met him, and he inspires smiles and laughter in almost everyone. He has learned all the Beatles number 1 songs by heart. He likes to “watch” Mickey Mouse Clubhouse. I have only had to change my life in that I have an extra plate at the table and an extra bed in my house. And we eat a little more rice now.

That scary special need? Not so scary. Seeing my son crushing my ideas of “scary”? Well… he’s pretty much the coolest and bravest superhero I’ve met! 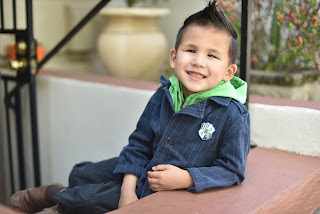 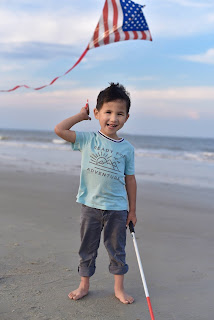 Posted by AAC Adoption and Family Network at 4:08 PM